Opinion: After George Floyd death, days of rage and anguish

Days of rage and anguish

“For there is another kind of violence, slower but just as deadly and destructive as the shot or the bomb in the night. This is the violence of institutions, indifference and inaction and slow decay.” – Robert F. Kennedy

The death of a hand-cuffed black man in police custody exposed the disturbing and documented trend of police brutality. George Floyd, 49, died shortly after his May 25 arrest in Minneapolis, Minnesota. A video provided to news outlets showed a police officer placing his knee on Floyd’s neck to subdue him, as three other officers watched. Less than 9 minutes later, Floyd was dead. On June 1, authorities released two autopsy reports that ruled his death as a homicide. CNN reported that Floyd cried out “I can’t breathe,” while he was being pinned down on the street, and that one of his last words was “Mama” [1]. “I can’t breathe” became the new chant of a movement against injustice.

Floyd’s death led to extensive protests across the United States. In solidarity, people in other countries also protested what was an apparent act of police brutality. Protests, some which turned violent and included looting, vandalism, and attacks on police, raged on for days in Minneapolis, New York, Chicago, and other cities. In the absence of a national call for peace and healing, police in some cities took unprecedented actions: “taking a knee” (a symbol of solidarity) in front of protesters, hugging protesters, and joining protestors in one peaceful march. In El Paso, hundreds of people took part in a mostly peaceful protest against Floyd’s death.

A police officer, armed with a gun and a badge, can do great harm if he or she also harbors fear. If he or she begins to view citizens as enemy combatants instead of as members of a community that they are sworn to protect. Anti-media bias - fomented by politicians that characterize media outlets as fake news machines – became another source of concern for potential abuse. On May 29, police in Louisville, Kentucky,  allegedly fired at a news crew that was covering a protest against the March 13 shooting death of Breonna Taylor, the innocent victim of an apparent police screwup. Why did police fire pepper bullets at the reporters? What threat did the white female reporter and her photographer pose? “Deadline” reported that the crew had obeyed the police restrictions; the incident remains under investigation [2].

Figures compiled by Mapping Police Violence indicate that 1,095 people on average were killed each year from 2013 to 2019 [5]. The average implies that killings by police are a fact of life in the United States. People took to the streets not only to protest the outrageousness of Floyd’s death, but also to respond to the impotence they feel when confronted with injustices on the part of powerful institutions. Why do people protest against perceived potential injustices? Rayven Koha-Jallah, 19, who participated in a protest in St. Paul, Minnesota, told CNN, "We're tired of being scared” [5]. The fear of becoming the next victim is part of what motivates people to push back, even if they believe that they themselves are powerless.

Was the police officer linked to Floyd’s homicide a racist? We don’t know. However, we do know that an irrational fear of others lies at the root of racism. In recent years, the nation witnessed a rise in citizen complaints to police involving blacks, Latinos, and other minorities. They were singled out because they “looked” suspicious to whites due to the color of their skin or other ethnic traits. Americans with Asian backgrounds have become the latest victims of physical and verbal attacks after being tied unfairly to Covid-19, which may have originated in Wuhan, China.

The Covid-19 crisis, with its still evolving economic fallout, may trigger the next set of massive protests in the near future. When hunger begins to set in, how will governments respond when the hungry – mostly minorities at first - take to the streets? Will they require police to fire at people stealing groceries? Will they send military tanks to quell those riots?

Diana Washington-Valdez is an award-winning international author and journalist based in Texas.

The Days of May: UNM 1970
New Radio Documentary Revisits the Vietnam Antiwar Movement in New Mexico
On April 30, 1970, President Richard M. Nixon announced the dispatch of U.S. troops to Cambodia, effectively escalating the Vietnam War.
The deployment triggered one of the greatest political crises in the history of the United States, as mass protests swept hundreds of U.S. college campuses.
Four students were subsequently killed May 4 by Ohio National Guardsmen at Kent State University and two more were slain May 14 by police at Jackson State in Mississippi.
The third most violent repression occurred May 8 at the University of New Mexico (UNM) in Albuquerque, where members of New Mexico National Guard bayoneted and injured 11 people, including news media personnel.
On the 50th anniversary of these events, KUNM will air a special one-hour documentary that revisits a critical historical juncture and examines the legacies.
Featuring rare, archival KUNM news stories  that were recorded in May 1970 and blended with the remembrances of UNM student activists and former news reporters interviewed half a century later, "The Days of May: UNM 1970,"  includes the voices of student protesters, young KUNM news reporters of the time, university administrators, National Guard officers and others. Popular music of the era rounds out the mix.
The Days of May: UNM 1970
Produced by Kent Paterson. Technical assistance by Marty Adams Smith and Ali Liddell.
Sunday, April 26, at 11 a.m. Mountain Standard Time
North-Central New Mexico: KUNM-FM 89.9 FM
or livestream at https://www.kunm.org
Important Note: Interested persons who cannot listen to the program during its April 26 air date can hear the program at their convenience for two weeks after April 26 by going to KUNM's two week archive at: https://www.kunm.org/two-week-archive
Information: Kent Paterson at kentnews@unm.edu

Opinion: After George Floyd death, days of rage and anguish

Opinion Days of rage and anguish “For there is another kind of violence, slower but just as deadly and destructive as the shot or the bo... 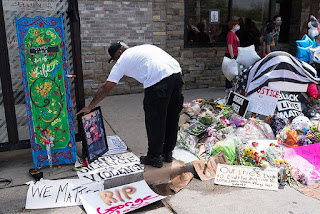